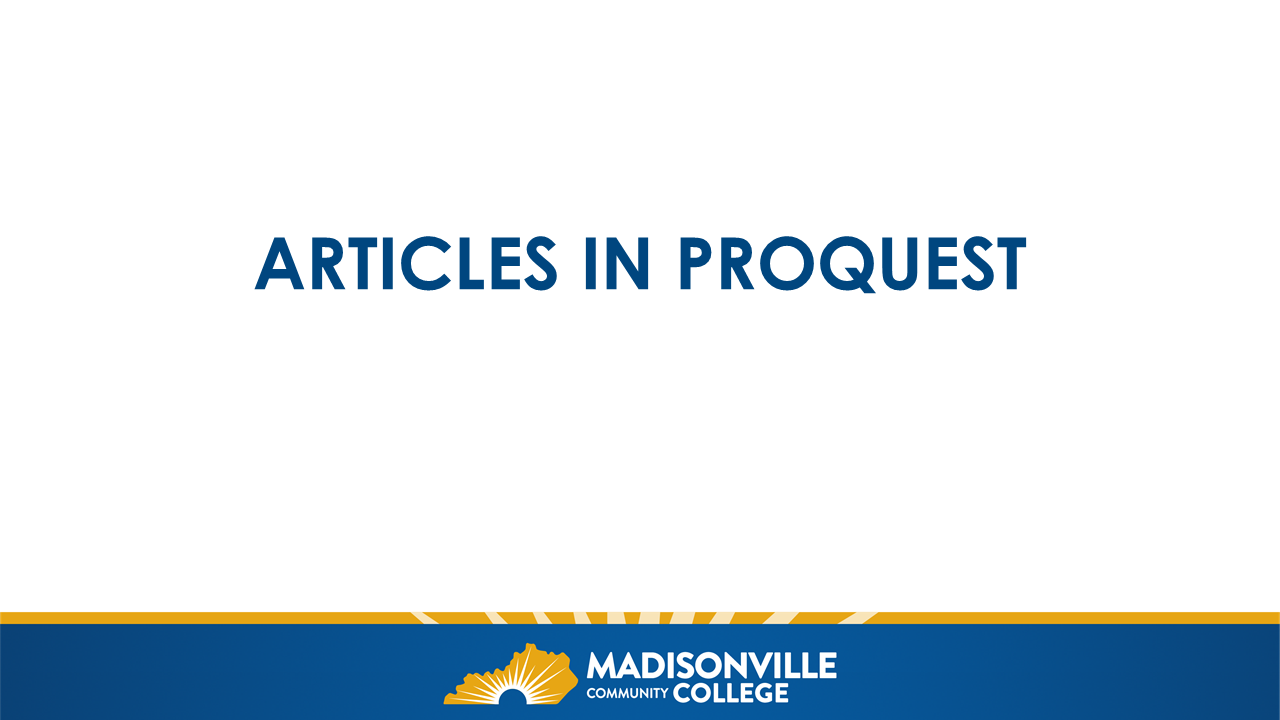 For the most part, you're going to want to search ProQuest to find articles. So in this video, we'll look at some of the different types of articles that you can find in ProQuest. 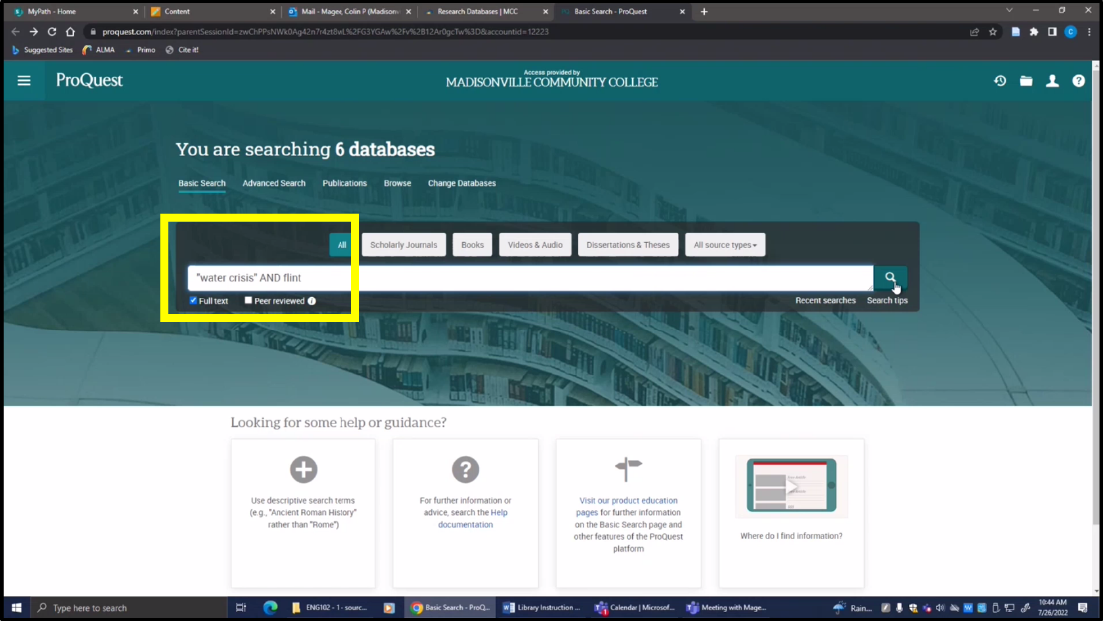 Let's continue searching for water crisis and Flint.  We'll type that into the search box.  "Water Crisis" in quotation marks, AND Flint.  Make sure full text is selected, and we'll hit search. 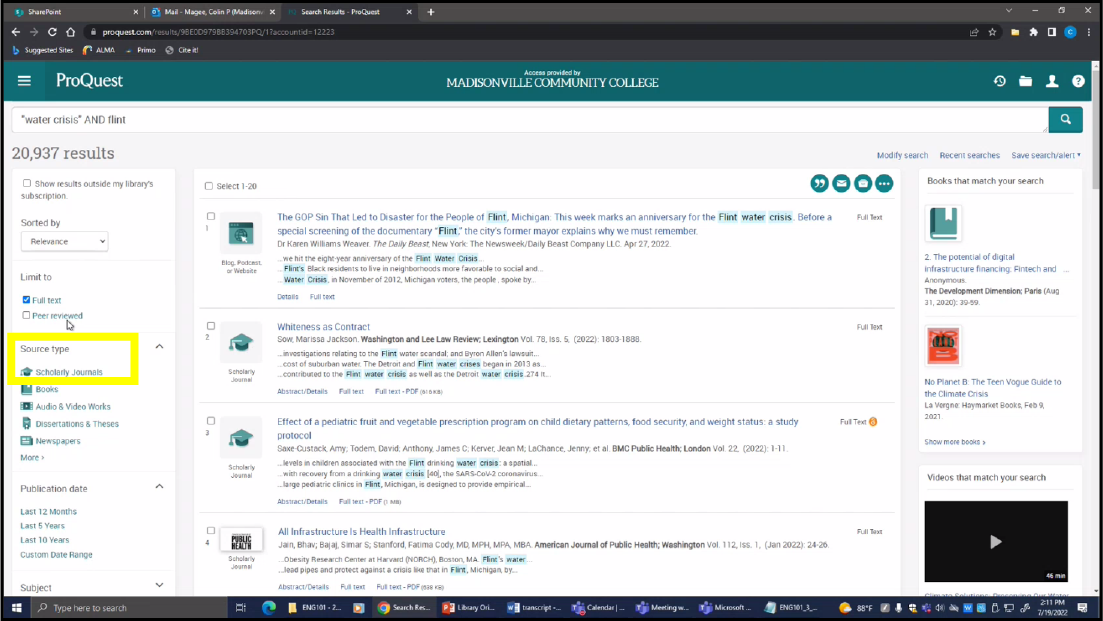 At this point, let's filter it to "scholarly journals."  There are two ways to do this.  You can limit it to "peer reviewed," which is another term for scholarly information (it just means that other scholars review it for validity before it is published). And you can also just click "scholarly journals" under "source type." Now everything in your results is a scholarly journal article. 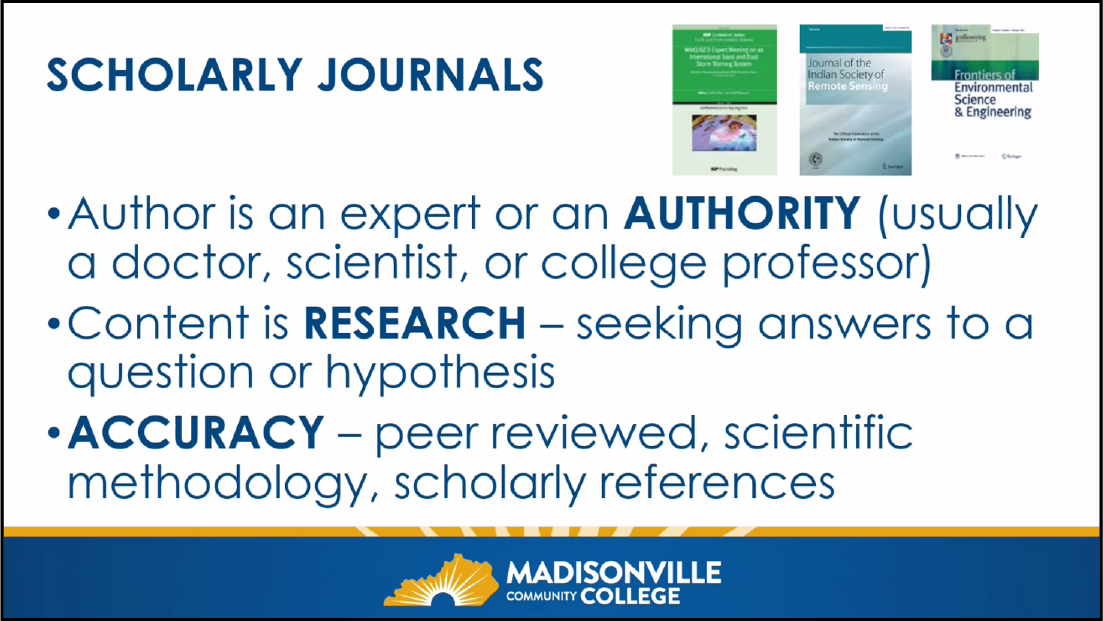 So what exactly is a scholarly journal?  Scholarly journal articles are research articles -- sometimes studies or experiments.  There are three characteristics about scholarly journals that make them different than just a regular article out of a newspaper or a magazine.  One is the authority.  Just like with a book, the authors of scholarly journal articles are experts in their field.  They can be scientists, or doctors, or college professors, or professionals in a medical field for example.  They are usually experts on the topic that they are researching.  That means they have credentials and have studied in that field.  The second characteristic that sets them aside from a news article is that the content is usually primary research.  They're studying something that's never been studied before in order to answer a research question or a hypothesis.  So for the Flint water crisis, a good scholarly journal article might be an actual study of the water, done by scientists, to determine just how contaminated the water was. The third characteristic is their accuracy.  Because they follow scientific methodology, go through a rigorous peer review process before publication, and because they often make reference to other scholarly research that's been done, the information in a scholarly article is pretty valid and accurate.  Scholarly journals never contain an opinion -- it's always a conclusion based on facts. So here's an example of a study done about the Flint water crisis. Let's click on this one: "Elevated Blood Lead Levels in Children Associated with the Flint Drinking Water Crisis." I'm going to click on "Full text PDF" and we'll get the actual image. This is what the article looks like in the print publication. It was published in the American Journal of Public Health. So, we'll look at the title first. They're studying the blood lead levels in children -- trying to see if the contaminated water in Flint had lead in it, and if that affected children who drank it. Just about all scholarly journal articles have an abstract at the top. An abstract is a summary of the entire article. That's this part here, in blue. So the objectives and methods: they analyzed blood levels, before and after the water source was changed. And the results and conclusions: the lead level did increase, and interestingly enough, it was worse in the socioeconomically disadvantaged neighborhoods. To make sure it wasn't some other factor that affected the lead level increase, they tested children living outside of Flint as well. Down here in the results, they show that their findings "strongly implicate the water source change as the probable cause for the dramatic increase in EBLL" which is Elevated Blood Lead Level percentage. The study also shows that lead levels were already higher before the crisis in the poorer areas of Flint.

One thing to point out about scholarly articles is that they are sometimes limited. Although they often do provide scientific evidence in a lot of cases like in this article -- which showed pretty conclusively that changing the water source to the contaminated Flint River was the direct cause of the Flint water crisis, this study had its limits. They only studied how children were affected, for example, and not adults. This study, also, does not attribute any blame. It doesn't talk about why the decision to change the water supply was made. While we know that the switching of the water source was the direct cause, we don't learn anything from this article about how that decision was ultimately a political decision. So scholarly articles are very focused on the scientific facts and that's sometimes it. If we go back to our search results, let's see if we can find an article that puts the cause of the Flint water crisis in better context. For that, we'll look for a popular article -- something from a magazine or newspaper that is written to inform the public. Let's get rid of the filter for "scholarly journals" over on the left. And now we'll click the filter for "newspapers" under "source type." 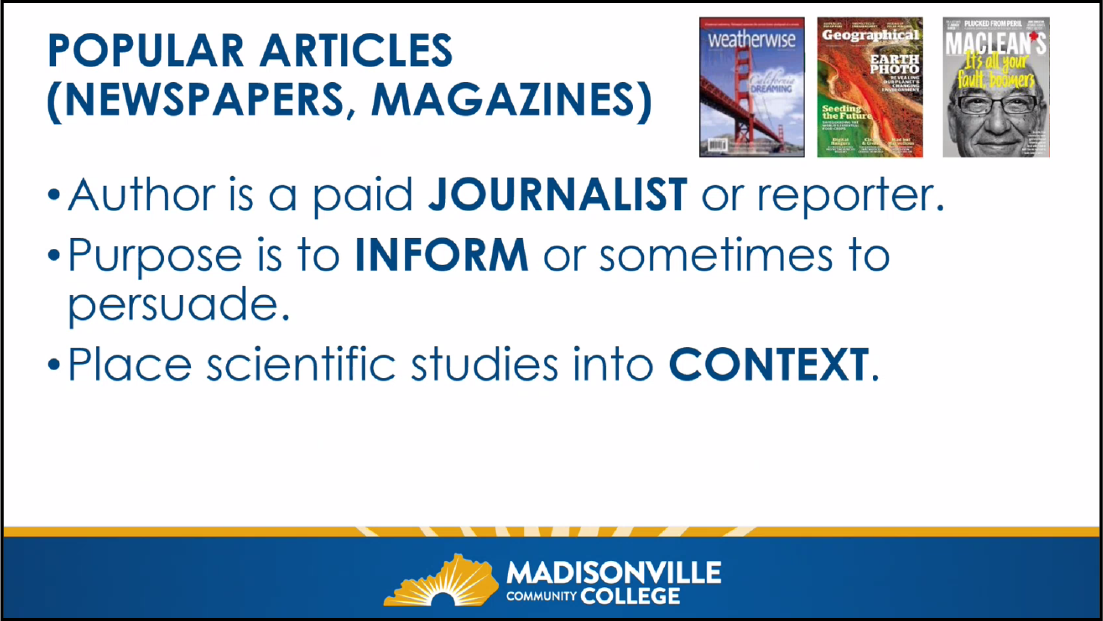 So a popular article is different than a scholarly article.  Remember that for scholarly articles, the author is an expert in the field.  That's not the case for a popular article.  Usually those are written by journalists or reporters.  They might do some investigating, but they aren't usually a scientist who's conducting original research on a topic.  Popular articles are written for the general public.  Their purpose is to inform.  They also put scientific studies into context.  The scholarly article didn't answer the question of why the water was contaminated in Flint, only that there was scientific proof that it WAS contaminated.  A news article on the incident will try and put that into perspective. A quick glance at this article shows us that the city and state governments were responsible for the decision to change the water supply, and didn't inform the public that the lead levels were dangerous until 18 months later.

So the scholarly article showed us a study that was conducted that proved there was a problem, and this newspaper article gives us the broader context that led to that decision.

Don't forget that once you find an article, you'll need to locate the MLA citation in order to cite your source. Click on "Cite" at the top right. The box that pops up defaults to an MLA 9th Edition citation. Copy and paste this into your Works Cited page. Next, you'll get a chance to take a closer look at the two articles that we just found: the scholarly article from the American Journal of Public Health, and the newspaper article from the Wall Street Journal.